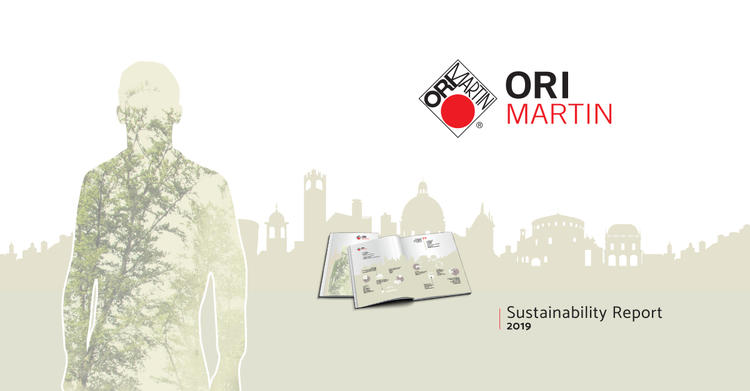 Ori Martin presented its "Sustainability Report 2019" today by videoconference with the intention to address its commitment towards issues that all stakeholders hold dear. The main areas of the document summarize the responsibilities, behaviour and social matters, the environmental and economic results fostered by the Brescian steel group. Care for the people inside and outside of the company and focus on the territory has been embedded in the culture of the group since 1933. Particular attention to sustainability and economic balance, product and process innovation.

Highlights of the Sustainability Report 2019 summarize 12 months of work in which more than 200 steel qualities, 674.456 tons of steel were produced by recycling scrap that otherwise would have ended up in landfills, furthermore 76% of the waste was sent for recovery. Last year the company produced  €428 million of generated value of which  €369 million of value was distributed to stakeholders, (suppliers, employees, public administration and the community); 429  people, including 24 women, 10  hired in 2019, 8740  total hours of training provided to employees; 82.750  Giga Joules of heat  have been  recovered and transferred to the district heating system of Brescia this in turn heats 2000 family homes every winter. Prepared according to GRI Standard (Global Reporting Initiative) guidelines the " Sustainability Report 2019" makes the companies actions totally transparent. Last year total energy consumption was down 6% on the previous year consuming 2,6 million GJ; 750.000 cubic metres of water were used, sourced from three different wells.  In 2019 Ori Martin drew up a five-year agreement (PPA) to buy energy produced by a photovoltaic park currently under construction in Sardinia which will allow the use of just under 100 GWh per year of renewable generated energy.

With a continuing commitment to improving environmental impact, since 2018 Ori Martin has developed   an underground pipeline 5 km in length - linked to an oxygen duct that avoids the liquefaction of oxygen with a yearly saving of 4000 tons of CO2 helping to prevent the transit of circa 1250 vehicles per year with approximately 270 tons of CO2 emissions saved.

The company - aiming to create a stable communication channel with the municipal administrations and local neighbourhoods - has since 2013 participated in the Ori Martin Observatory this has built upon   continuity, making a long-lasting allegiance, following the first Technical Table experience set up by the municipality of Brescia in 2010.  Ori Martin has invested in the creation of more than 3 km of cycle paths, the donation of a Bike Sharing station, together with an area of 40.000 square metres, given to the city, to landscape as a public park and completed in 2020 This is a concrete illustration of the company's policy to be part of improving the community.  For forty years the company has also supported numerous organisations that operate in cultural and social fields.

Dedicated to Oger Martin, Roberto de Miranda and Walter Magri, the first Sustainability Report opens with a letter to stakeholders from the President of the company Uggero de Miranda who underlines that the document is the starting point for a strategic long-term vision, based on the increased focus on sustainability and on the company's centenary history, an irreplaceable source of experience, knowledge and relationships. Carolina de Miranda, Sustainability Manager, also emphasizes how " Ori Martin group has developed by making top quality products with the workforce contributing in a decisive way."  She has remembered that this group has always innovated to improve the technical processes and products, with a constant attention to the coexistence between the company, environment and territory.

Thanks to an intense collaboration between the...

2019 financial statements: the ORI Martin Group closes the year with a positive result, confirming its consolidation with 5 acquisitions

Investments, in new technologies as well as in...

ORI Martin: an even more sustainable and circular steel mill thanks to the HEATLEAP project

After the important experience of the i-Recovery...